Age UK have found that up to a quarter of over 65’s are not actually looking forward to Christmas as it brings back memories of bereavement and that half a million would be spending it alone, while 20% were worrying about getting outside when the weather turns colder.

Esther Rantzen’s new charity “Silver Line,” which was launched nationally on Monday, might be helpful for many of these people.

“As the ageing population continues to grow, social circles reduce, and families in our geographically mobile world become more divided, we start to realise that a lonely old age could be our lot, too.” Source:Telegraph.co.uk

After her own partner died Esther realised how lonely she was and decided to do something about it. Esther, who set up Childline in the 1990’s, piloted SilverLine to offer telephone support to vulnerable older people after reading about other older peoples letters in the Daily Mail. 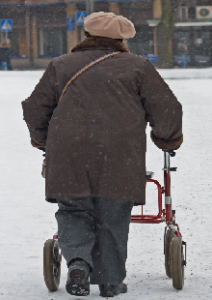 The charity aims to take on over 3,000 volunteers in it’s first year, which will be matched to an estimate of 12,000 older pensioners.  As part of the 24 hour service they will signpost people to local organisations that can help such as Contact the Elderly, who already run a support service that offers Sunday afternoon tea parties to help isolated over 75’s to feel involved and less lonely. Also the local Townswomen’s Guilds and the Women’s Royal Voluntary Service can offer support to older people within their own communities, with various initiatives.

Loneliness in the elderly is a big stigma, like stair lifts can be for some, as people who are perhaps too proud to admit it, struggle on without doing something about it.  The physical effects of being lonely are known to dampen the immune system which makes people more susceptible to infections and illnesses.  It is also, according to research by the Campaign to End Loneliness, equivalent to smoking 15 cigarettes a day in terms of it’s effects on health and well-being.  Writing in the Independent this week they report that up to 1 in 10 patients in the GP’s waiting room are there out of loneliness, rather than having any actual health problem. The Campaign is aimed at getting society to still keep it’s elderly residents connected and feeling part of other peoples lives.