The month of April is National Awareness month for Parkinson’s and to mark that occasion we have taken some of the latest medical research gathered by myself and collected it into this article to help people manage their symptoms, whether they have bought a stair lift or not.

But make sure that you get it right as some people get it very wrong when it comes to Parkinson’s. See this below

The first piece of information for you is actually a video which is footage from a conference about using Rhythmic Auditory Stimulation with people who have P.D. We all know the benefits of exercise in feeling good and getting healthy, but the particular needs of the Parkinson’s Disease sufferer relate to core strength and balance, much more than a conditioning aerobic workout, as well as con-ordination. By timing their movements to an audible rhythm – like a metronome they gained definite increases in motor skill. You can watch the video below.

The next piece of research comes from Israel where a Dr.Ron Buchner and Prof. Gil Ast have found in experiments on lab rats that a common food supplement derived from soy, beef or seafood can help to delay the worsening of the condition. 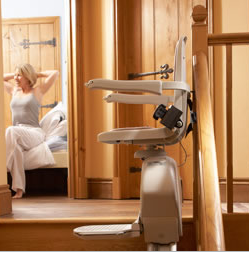 The supplement is called phosphatidylserine and can be bought online from supplement shops or on the high street from stores like Holland and Barrett or Boots.

The findings are very encouraging, and give us a reason to believe that phosphatidylserine can have a beneficial effect on a variety of degenerative diseases of the brain, including Parkinson’s, Ast said. Source:Haaretz.com columnist Dan Even

Another video now which profiles the use of ballet with sufferers of Parkinson’s Disease. In an ongoing study from the University of Roehampton people have been helped with their muscle control and walking by attending ballet classes alongside members of the English National Ballet. You can see more about it on the BBC site here. Peter who has had the condition for 4 years says that people say he actually moves better than he did 3 years ago which proves the benefits for something which is usually seen as a degenerative condition.

Tell us what you thought of these things in the comments. Do they ring true for you? Will you be trying any of these out?