We know that for most of us, we slow down as we get older. We suddenly find ourselves taking more time to do the simplest jobs. In June 2012 a survey carried out by Dr Laura Ashe of University College London found that older folk also walk more slowly too. The study was reported widely in the national media. 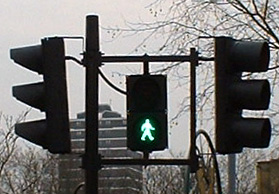 Her study looked at the time allowed for crossing the road at pedestrian crossings. The measurement used considers the average time it takes for a healthy person to walk 1.2 metres as one second. Her study had particular relevance to crossing the road, something that many senior citizens feel wary of anyway.

So typically on a pedestrian crossing, the green man is alight for four seconds and then he flashes or goes black – during this time it is still safe to cross. But many older people don’t find this time long enough – it doesn’t even sound long enough.

The survey conducted by Dr Ashe considered walking speed tests conducted in 2005 by the Health Survey for England (HSE), which noted the walking speeds of 3,000 senior adults. Dr Ashe reported to the research journal Age and Ageing that on average the speed of pensioners is just 0.9 metres for men and 0.8 for women per second, confirming that they don’t walk as fast as younger or more able-bodied people.

If you’ve had to try to dash across a pedestrian crossing or worry that you won’t make it the whole way as the cars rev their engines, you won’t be at all surprised to find that older people on average walk more slowly than estimated. Watch this BBC video of the Dads Army cast on a Public Information film below to see how long you get.

Dr Ashe also discovered in her research that 93% of women and 84% of men in this age group had walking problems.

A spokesman for the Local Government Association commented, “The formula councils use for timings at pedestrian crossings actually gives people far longer to cross the road than this flawed research suggests.” We don’t think that’s what Anita in this BBC video thinks!

Age UK are pleased the research has highlighted the problem, “Older people should not have to feel vulnerable when they are doing something as basic as crossing the road,” commented spokesperson Michelle Mitchell.

At all ages we are encouraged to exercise and this includes walking. For senior citizens depending on their mobility, this is often the best exercise they can achieve and to make getting from A to B dangerous or at least make them feel concerned seems unnecessary.

London trials
In London they have trialled ‘Pedestrian Countdown Technology’ thanks to Boris Johnson. To put it more simply, pedestrian lights that have a countdown display. This shows pedestrians how long they have to get to the other side once the green light starts flashing and before the red light shows.

They were trialled at several busy crossings and in general people felt safer knowing how much time they had. At the beginning of last year London planned to roll them out to 200 sites across the city as a permanent feature.

But this is just in London and of course it costs money, so we suspect most councils won’t feel in a position to invest in this when they are already being pressured to make cuts.

It seems strange that new technology has to be introduced when an easy adjustment to the length of time a light stays green can be implemented to accommodate everyone. Surely another few seconds wouldn’t affect traffic flow, but it might make the lives of senior citizens or those with a mobility problem safer and less stressful.

Do you think that your local crossing gives you enough time? Would infra-red traffic signals work better so that they only stop the flow of traffic when a pedestrian is waiting at the crossing?  Have your say in the comments.